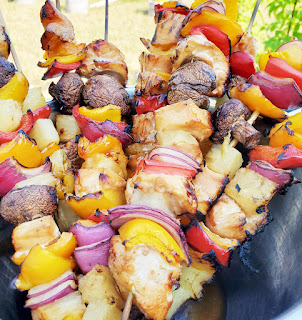 It's too hot. Too hot to cook, to hot to think, to hot to think about cooking. Especially inside. When the weather gets this brutal cooking outside is the best option. Grill cooking doesn't get the house hot, doesn't require lots pots and pan clean up, and doesn't take long from meal prep to table. For example tonights ten Hawaiian Teriyaki Chicken Skewers took less than hour. That included starting the grill with wood, cutting veggies and chicken, marinade time, skewer prep, and cook time for both skewers and the side of rice. Nice and easy.
Modifications Made:
Did I mention it's too hot to cook? Well it is. It is too hot to cook marinade sauce, therefore, all ingredients were tossed into a microwavable bowl and cooked and stirred until a nice consistency.  Mushrooms were added and green bell pepper was omitted. To sauce, all veggies were added to cool down the sauce before chicken was added.  Mixture allowed to marinate while fire finished getting ready.
Scaled for Likeness: Great
It is the pineapple sauce in the marinade that makes these kabobs so fantastic.  The veggies are just veggies and the chicken is just some lab grown meat cut into cubes but the sauce binds the different flavors together into one sticky, tasty stick.  When making kabobs, do yourself a favor, make more than you think is necessary.  Ten kabobs, three people, two kabobs too short.  Besides with extras made, the leftovers can be tossed over rice the next day for an easy dinner.  Bam, two meals in one.