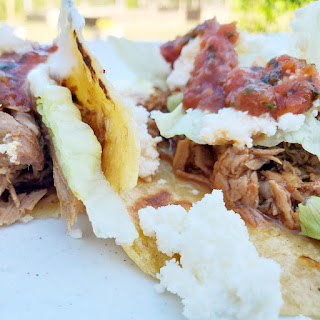 Wild pig can be difficult to cook as it tends to be dry and depending upon the age of the pig very tough. Not wanting to waste a young pig, Slow Cooked Wild Pork Carnitas sounded like the perfect fit.
Modifications Made:
Only the shoulder of the piglet was used instead of three pounds of various pig parts.  Only itemed omitted was the half can of beer and instead a cup of beef broth was added instead.  The shoulder was cooked in a crockpot on low until falling off bone.  Meat was shredded and returned to pot until juices were cooked down.  To create the dry edge associated with carnitas, the pork was added to a searing hot cast iron skillet and moved very little until juices were dried and meat crisped on the edges.  Butter was omitted as the meat was seared in a fine layer of bacon fat.
Scaled for Likability: Great
Cooking wild game, especially pork with citrus helps to overcome gamey taste while tenderizing the meat at the same time.  Once cooked, topping carnitas with additional lime juice along with salty queso fresco and crisp lettuce is heaven in taco form.  My only complaint, only having been gifted one pig shoulder for cooking.