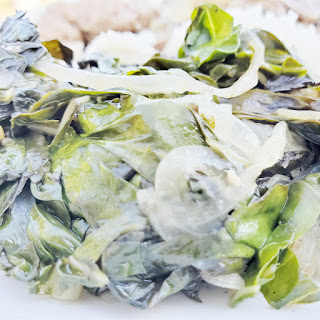 The last of the swiss chard for the season had been picked.  Texas summer heat, soil drainage issues, and lack of rain for too many weeks to count has finally killed the swiss chard. Oh don't get me wrong, the plant looks beautiful and alive first thing in the morning. By the time noon rolls around, the leaves have shriveled. But the time four pm bears down, the entire plant has wilted over and is literally laying on the ground.  To commiserate its final bounty, the last meal had to be special.  Caramelized Onion & Swiss Chard seemed like a fitting farewell.
Modifications Made:
After the swiss chard is wilted, the dish is removed from the heat and allowed to rest without further caramelization of onions.
Scaled for Likeness: Good
Caramelized onions take more time than the recipe states is needed for the whole meal, resulting in a dark brown toasty coloring, and would not have paired well with the swiss chard.  Onions instead were cooked until very translucent and soft before adding swiss chard. If at this point the swiss chard and onions were cooked until the onions caramelized, the finished result would have been chard that was either mushy or burnt from over cooking. Omitting the caramelized onion and leaving the translucent coloring provided a nice contrast to the dark green of the chard.
Unlike other swiss chard/onion dishes, what made this recipe unique was the simple step of thinly sliced leaves to match the thinly sliced onions. No large leaves to chew/cut around, just smooth strips. It was a nice change to the normal and will be put into future uses.