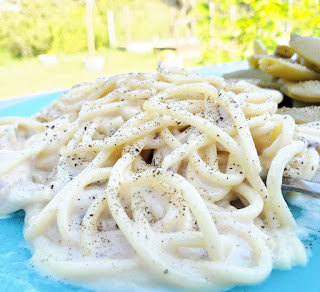 Not in my recollection have I ever made Chicken Tetrazzini. Still on the kick of using up pantry staples, only sour cream and cream of mushroom sauce was purchased as the chicken was farm raised free range birds.
Modifications Made:
Yard bird was boiled in heavily seasoned with onion, garlic, salt and pepper until falling off bone.  Chicken was removed and stock reduced.  Recipe was halved, regular noodles replaced linguine, cream of chicken was omitted due to halved stated and heavily seasoned chicken broth.  Salt was omitted as chicken stock and cream of mushroom soups were plenty salty.  Chicken, soup, broth, and other ingredients were allowed to cook the entire time the pasta cooked to allow flavors to meld together and hopefully help tenderize the yard bird. Once nice and creamy, the noodles and cheese were added and mixed until smooth.  Baking in a oven was omitted.
Scaled for Likability: Good
Not really a cream of anything soup fan, however, there were enough ingredients to mellow out the soup flavor.  Allowing the chicken and soups, etc to cook and meld together really helped with this lack of soup flavoring.  The sour cream was the golden ticket to the meal.  The tang offset the soup, added a thickener instead of using flour, and made the stock a nice creamy texture to fully cover the noodles.
This dish would be perfect for any leftover chicken meat: boiled, baked, rotisserie, bbq, fried.  It came together in less than 45 minutes and paired well with green beans from the garden.