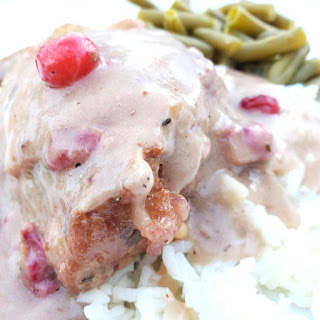 Finding dishes using fresh cranberries is turning out to be more difficult than expected. Difficult if the dishes are not dessert, that is. Tonight's' dinner, One Pan Rosemary Chicken, held high expectations with just a few fresh ingredients including chicken thighs, rosemary, and of course cranberries.
Modifications Made:
The recipe was more of a idea platform.  A idea where none of the instructions were followed.

Chicken thighs were fried in skillet in bacon grease.  Once internal temp was reach, thighs were removed.  Marinade sauce was used to create a cranberry gravy.  Chicken was returned to gravy and allowed to simmer for 30 minutes adjusting water as needed to keep gravy from sticking.
Scaled for Likability: Fail
I just have two words to describe the reason for failure.  Sugar. Gravy.
Nothing more needs to be said.  Gravy and gravy covered rice was removed. Chicken was peeled from the bone and a new batch of rice was made.  Deboned chicken was added to buttery rice and dinner was served.