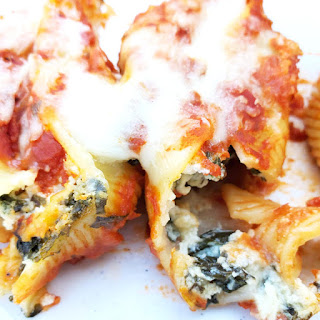 I've said it before and I will say again, Pandemic 2020 alongside with the task of cooking new recipes every day for year has really broaden by cooking skills. Another step off into the previous fear and unknown cooking, stuffed shells. Taking the advice from a YouTube foodee who states all elements of a recipe must be tasty on their own, I decided Spinach and Ricotta Stuffed Shells sounded the perfect jumping off point for another new culinary treat.
Modifications Made:
Frozen spinach was thawed and drained very well in a paper towel.
Scaled for Likability: Good
Sailboats in a sea of marinara sauce was how I envisioned stuffed shells.  Sailboats run a ground was what I produced.  Stuffing inside the shells could hold its own on flavor, and empty shells in just marinara sauce could hold its own.  When combined with cheese, there was just not enough sauce resulting in dried out shell ends.
Next time, a dash of nutmeg will be added to spinach mixture and the sauce will be doubled.