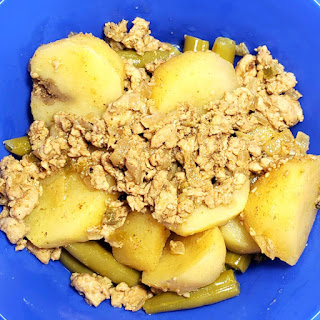 It was the garlics fault. Any recipe calling for one tablespoon of garlic had to be tried.  A tablespoon! Ground Pork Vandalia with Potatoes was not only loaded with heaping amounts of garlic but pepper, ginger, paprika, and potatoes, too.
Modifications Made:
One teaspoon of dry mustard replaced black mustard seeds, a jalapeno for the serano, and dried cilantro for coriander.
In a large dutch oven, onions were sauteed with meat.  Potatoes, seasonings, and water were added and allowed to simmer until potatoes were fork tender adding water as necessary.
Scaled for Likability: Great
With minor modifications made, I really don't understand why the original recipe was saucier and darker in color.  None of the ingredients listed would have produced the rich dark caramel coloring.  However, the final result was a different flavored picadillo and was happily eaten.  Oh, and the one tablespoon of garlic, hardly noticeable.  Guess this table eats a lot of garlic.
Next time, the potatoes will be cut into bite size pieces for easier eating.  Meat and potatoes will be served with a side salad instead of green beans.