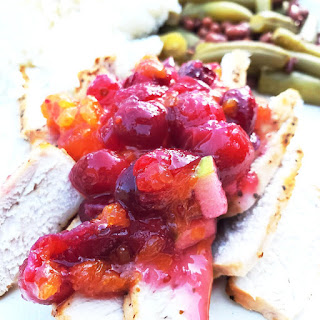 Its finally here!!! Cranberry season has arrived to my local grocer. Not wanting to miss out on the plethora of cranberry recipes that have been saved up, I bought two bags yesterday and put one bag to use today.  Cranberry Apple Pork Chops was the winning choice because pork steaks were on sale at $1.79/lb.
Modifications Made:
Pork Steaks: Seasoned with Tony Chachere's and fried in bacon grease.
Sauce:1/2 small yellow onion, finely diced
1/2 Granny Smith apple, peeled, finely diced
1-1/2 cup fresh cranberries
15 oz mandarin oranges, undrained
Salt
To a saucepan, onion cooked till tender.  Apple, cranberries, and juice from oranges were added and cooked until apples were tender.  Oranges and a dash of salt were added and mixture allowed to rest.  If sauce to thin, one half teaspoon of cornstarch mixed in one teaspoon of water can be added to thicken.
Scaled for Likability: Great
The recipe for this cranberry apple sauce was right up my directional alley.  It mostly was an idea and with tons of suggestions and modifications.  And let me say, my final product looks way better than the original.
Next time the onion will be left out so the remaining sauce could be used as a toast/oatmeal topping.  Apple dices could have been slightly larger as the apple bits were not noticeable in the sauce.  Walnuts or pecans would have been great, as suggested, in the sauce.