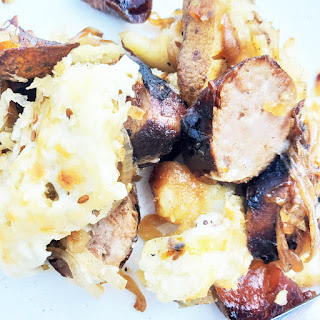 Well, it wasn't what I had in my head but the final results were edible. The brats were over cooked and not covered in a melty cheese. Oh, and it needed rye bread.
Ingredients:
Two large russet potatoes, thinly sliced
Three grilled brats, sliced thin
Sauerkraut, well drained
White cheddar cheese, shredded
Butter
Salt & Pepper
Instructions:
Boil potatoes whole in salted water. When just short of fork tender (want some hardness) drain and let cool. When cool to touch without a towel, slice into 1\8" rounds. Set aside.
Grill brats to correct internal temperature.
In a large cat iron skillet, layer russet potato slices. Dab with butter slices. Sprinkle with pepper. Layer sliced brats. Layer drained sauerkraut. Top with shredded cheese. Bake at 350 until cheese is brown and bubbly.
Scaled for Likability: Good
Tender potatoes, dry brats, separate layers that fell apart.  The flavors were exactly what I was trying to achieve, the presentation needs refining.
Next time, the potatoes will be cut into large chunks, brats will be undercooked, sliced into quarters lengthwise, and diced, and the two will be mixed with sauerkraut and butter chunks before placing into a well buttered cast iron skillet. The entire mixture will then topped with shredded swiss and baked until warm and cheese brown and melty.  Toasted, buttered rye bread will be served on the side.