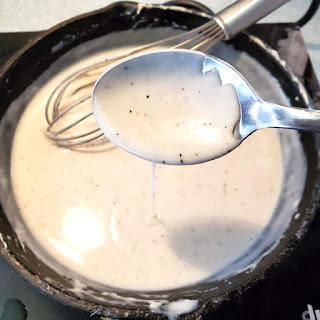 So many tries, so many fails. I've tried this recipe and that recipe, failed at this recipe and failed at that recipe. The last was the closet of them all to my moms T&T white gravy, which I failed at too.
This morning I promised the teen table counterpart chicken biscuits with gravy. Biscuits were leftovers, chicken tenders cook in the microwave, gravy from a packet. Ugh, no packet and the tenders were already cooked, getting cold and hard on the counter. What to do, what to do? What else to do except attempt homemade cream gravy, again.
Ingredients:
Bacon grease
Flour
Milk
Salt, Pepper
Water
Instructions:
Melt one part bacon grease in pan (approximately 1 heaping tablespoon). Sprinkle in two parts flour (approximately two heaping tablespoons). Whisk until incorporated and continue whisking over medium heat until slight color appears to flour mixture. Slowly whisk in skin milk on low heat until runny consistency desired (approximately two cups) . Add salt and pepper to taste and let cook for 1-2 minutes testing for taste. Once gravy thickens add water to thin to desired consistency.
Scaled for Likability: Good
This was basically my mom recipe but tweaked for personal preference such as one part grease to two parts flour and skim milk instead of whole fat milk. Three key steps to success was bacon grease not butter, cooking the flour longer, and using real milk not instant milk or equal parts milk to water.
Why good instead of great? If I can duplicate this recipe with the same results then it will be great. I also would to reduce some of the milk and either substitute powdered milk or plain water and it was a little too milky for my tastes.