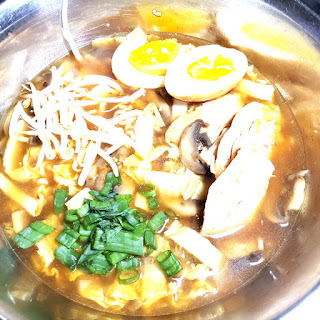 For over a year I have read about traditional Ramen soup, watched dozens and dozens of videos about the making of traditional Ramen soup, and then made comparisons to knock off Ramen soups requiring on a few cook hours instead of few days. It wasn't the soup stock that scared me it was the lack of access to the ingredients. Finally settling on a middle of the road Easy Chicken Ramen soup, new condiments were purchased and dinner was cooked.
Modifications Made:
White mushrooms for shiitake, regular ramen for yakisoba noodles, and added bean sprouts.
Scaled for Likability: Good
Good if the egg and chicken were not included.  Ramen eggs are not to this table's liking.  Luckily extra plain hard boiled eggs were made to switch out for the ramen egg.  Never before has chicken thighs been included in a ramen soup.  Chicken texture was weird.  Ramen soup tasted more like hot and sour soup but was good as I like hot and sour soup.  In fact the only thing missing to be hot and sour soup were the mushrooms, bamboo shoots, and fried wonton strips.