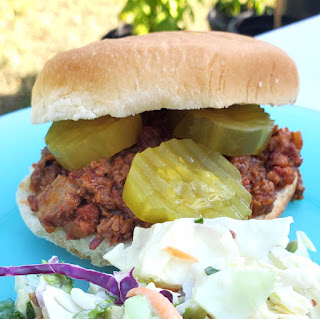 Tough brisket is a killer diller. Hours upon hours spent tending to it over the fire so it cooks nice and slow allowing the meat to do its thing.  An entire days worth of work and the first slice through requires a wood saw. Ugh. What to do, what to do.  A quart size bag of sliced brisket saved to the freezer for break glass; there is nothing in the whole pantry to eat; emergency and the rest was ground with the food processor.
Half the ground beef was served in a BBQ Empanada, the other half is being served as Chopped BBQ Sandwiches.
Nothing fancy here.  Just ground tough brisket tossed in a sauce pan with enough BBQ sauce to cover.  Meat is simmered on low for 30 minutes adding additional sauces and/or water to keep meat loose.  Serve over with pickles and a bun.  Dinner done.
Scaled for Likability: Good
These were not the oily, grease laden goo from the local BBQ stand.  These were not great chops either as the meat was still tough.  Meat was flavored through and through, sauce was sticky and held well to the bun, and pickles offered the perfect balance of tang to the BBQ sweet. If the meat had been good to begin with, then homemade chopped BBQ sandwiches would have been great.