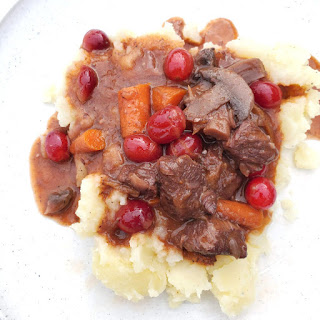 Many moons ago way back before the teen was even a blip, I attempted to make the classic version of beef bourguignon. Maybe it was the inexperience, maybe it was the cut of meat, maybe it misguided view of wine. Whatever the reason I don't remember enjoying the meal. With time and learnings I have come to appreciate cooking with ingredients outside my comfort such as wines. Not being a consumer of any alcohol it is hard to know what is good wine and what is bad wine.  Thankfully today there is the internet to help in learnings.
Ever in my quest to cook cranberries in dinner, Cranberry Beef Bourguignon was cooked yesterday and served to tonight.
Modifications Made:
Holy moly, this recipe stated it served six but called for two and half pounds of meat.  Therefore, this recipe was halved for all ingredients except the meat which only totaled .97 pounds.
Cognac was omitted as the wine was enough alcohol flavoring for my taste.  Carrots were increased to four large sticks and mushrooms were increased to 16 oz to offset the decrease in meats.

Scaled for Likability: No, Thank You
Have no reasonings for not liking the bourguignon other than it is just an overly fussy meal.  Flavor was full, meat was tender, and carrots and cranberries offered a nice color.  For all of the effort, this table would rather have had pot roast with cranberries added.