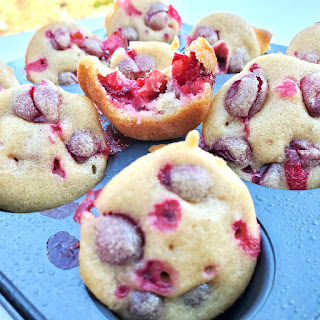 Cranberries! Last night for dessert the entire table had two slices of artisan bread heavily toasted on the griddle, lathered in butter, and topped with a heaping tablespoon of homemade cranberry sauce. It was so, so good. Realizing not one new cranberry dessert had been made since having discovered the fabulous-ness of cranberries, Cranberry Orange Muffins were made straight away. Mini bites of tangy,  wonderfully popping, moist and fluffy cranberry muffins.
Modifications Made:
Recipe was reduced by half.  Sugar was reduced to just under 1/4 cup. There is a difference between light and brown sugar.  Light brown sugar was used to not distract from the cranberry flavor. Since adding vanilla and yogurt, vanilla greek yogurt was used with a teaspoon of orange extract instead of vanilla and plain yogurt.  Zest of oranges and orange juice was combined into one tablespoon of frozen orange juice concentrate.  Fresh cranberries, not frozen.  Glaze was omitted.
Scaled for Likability: Great!
Easy to make, light and fluffy in texture, full of mouth popping cranberries.  My only complaint, 12 mini muffins did not make enough.  Three people, four mini muffins each.  Sad.  Guess these will have to be made again tomorrow!