Not Your Classic Chicken Soup 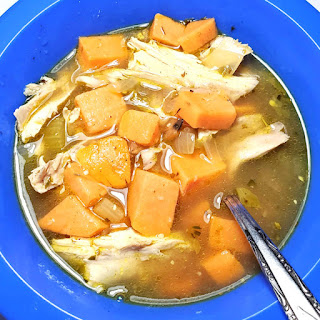 Chicken soups all start the same: boil a chicken with carrots, celery, and onions. After that is when the recipe diverts: seasonings, rice, noodle, cream, cabbage, sweet potatoes. Nothing new with changing a classic winner to include more nutrition. Chicken and Sweet Potato Stew seemed like a winner on paper.
Modifications Made:
Bacon was omitted.  Yes, omitted.  There was just something so wrong about chicken soup with bacon.  Something wrong about sweet potatoes with bacon.  Bacon DOES NOT go with everything, contrary to popular culture.  But the carrots and celery were fried in bacon grease before the half of chicken cut into quarters was added.  Wine was replaced with half water half mirin.
As soon as the chicken was falling off the bone, the chicken was removed, shredded in large chunks and added back to the stock to simmer on low.  Seasonings were adjusted to include more pepper.
Scaled for Likability: No, Thank You
Sweet potatoes in chicken soup does not jive.  There is nothing to offset the sweet from the potatoes.  Chicken soup without a starch like noodles or rice is not very filling.  Instead of cornstarch, the broth needed a flour mixture added to thicken up the soup to more of a chowder consistency.  Maybe.  It really was the sweet potatoes that was wrong with this dish.