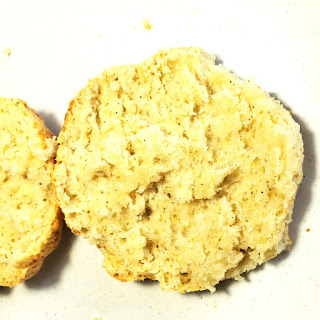 Last night's Octoberfest recipe was a flop for more than one reason, the biggest being the lack of ooey gooey, cheese topping. With a half of block of white cheddar cheese and no meals planned in the foreseeable future, a quick search was needed.  What to do with white cheddar cheese that is not a cream based sauce?
Originally an egg dish was given thought, then a garlic cheese bread, then the table counterpart suggested replacing regular cheddar biscuits with white cheddar. Bingo. Peppery White Cheddar Biscuits for breakfast this morning.
Modifications Made:
Recipe was scaled to half.  One small ping pong sized egg was used in place of one "normal" egg.
Scaled for Likability: Great
Once a thousand years ago I was invited to Red Lobster where I watched in fascination as my entire table raved about the cheddar biscuits and their meals.  What I remember was oily cheese biscuits and oily garlic shrimp.  It was not a pleasant experience.
Now more than 20 years later, after some hesitance, a warm flakey, peppery, tender, and moist cheddar biscuit was enjoyed. They were everything the table counterpart was looking for in the biscuit and super easy to make. They would be great with a fried egg and a couple of pieces bacon for breakfast sandwiches.
So inspired by the success of Cheddar Pepper Biscuits, next time its gonna be Bacon Cheddar Chive Biscuits.