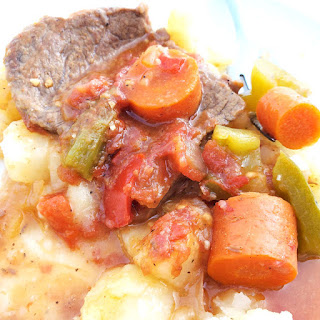 The table counterparts' grammy apparently could not cook except for a half dozen recipes such as Cranberry Sauce and Swiss Steak. Having made cranberry sauce last turkey season, it was time to make Swiss steak.
Modifications Made:
Fresh minced garlic instead of powder and one full teaspoon of pepper.  Two green bell peppers were added to the carrot and onion mix.
Scaled for Likability:
This was closest recipe I could find matching memories from a meal not eaten in over 20 years.  Being memories are never really true to actuality, this Swiss steak was a good as the memory.  Meat was tender, juices were full of flavor and depth and did not taste just like tomatoes, carrots still had some chew but the green peppers were fork tender.  Served over a heaping spoonful of buttery mashed potatoes and a slice of white bread, this meal if a future T&T winner.