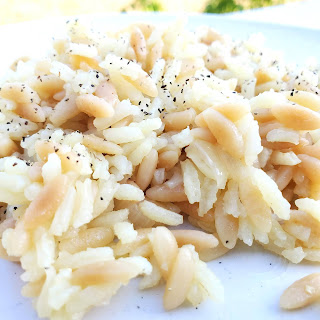 Meals in college were some of the most random items mixed together to create a cheap and easy meal.  My ultimate failure was the time I combined a can of tuna with a box of chicken Rice-a-Roni".  It was not "The San Francisco treat..." but it was less than a dollar and it feed me for three meals.  Once I even added a bag of frozen mixed veggies making it a buck fifty in costs expanding to five meals.
See back then Rice-a-Roni was cheap and good.  Now it is still relatively cheap but not good.  It literally tastes just like salt.  Wanting a good rice pilaf to have with a side salad, Sarah's Rice Pilaf sounded like a great starting platform.
Modifications Made:
Onion and garlic were switched out for powder.
Scaled for Likability: Good
For a super simple rice pilaf this was not bad.  And if compared to the box versions, it was great.  I think the key to good rice pilaf lies in the usage of quality chicken stock.  The kind that comes in a glass jar not the kind in a foil wrapped square.  It was no more work than Spanish rice and was void of leftovers so it is a keeper until a new version can be found.