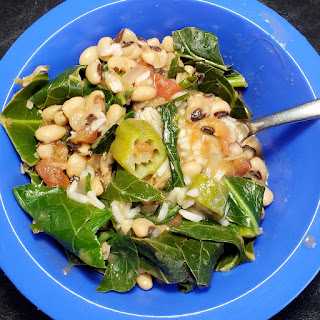 Still wanting a soup/stew/stoup with cool weather and having fresh chard in abundance Harissa Stewed Black Eyed Peas with Okra and Collard Greens was made.  Learning from the Mexican Black Bean with Carrot disaster last week, black eye peas were cooked earlier in the day in a simple pollo de tomate stock and then used as instructed in the recipe.  Results were ten fold better than the black bean mush.
Modifications Made:
White onions were softened in bacon grease, garlic and tomatoes were added and allowed to cook until tomatoes softened and juice evaporated.  Frozen okra, fresh collard greens, cook peas, and two cups of chicken stock were added to pot.  Tomato paste, harissa, and cinnamon were omitted.  Seasoned with Tony Chachere's, mixture was cooked until greens were soft.
Rice was cooked on the side and added directly before serving to retain its texture and color.
Scaled for Likability: Great
Okra gumbo, black eyes peas and cornbread, collards with tomatoes and onion.  All southern staple side dishes combined into one hearty soul filling meal.  A dash of Tabasco sauce and dinner was a hit.  This meal will definitely be added to the T&T collection with one change.  Tomatoes will be cooked at the same time the onion to ensure they are softer in texture and chicken stock will be replaced with pollo do tomate instead.