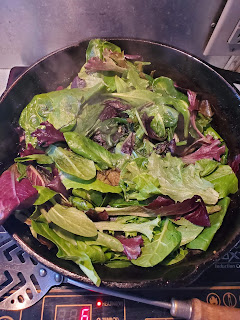 A veggie was needed to serve alongside the ginger pork stir fry as this stir fry only contains meat and served over white rice.  Unlike most veggie dishes, Stir-Fry Spinach with Garlic did not contain a single carrot, broccoli stem, mushroom, or green onion.  It was simply spinach, garlic, and chili.  It sounded wonderful.

Modifications Made:
Other than using mixed greens for the spinach, the recipe was followed as written.

Scaled for Likability: Good
So simple and pretty and tasty.  Dark greens, bright orange pork, and white rice, what a brightly colored plate.  The only reason this recipe was not rated at Great was the oily residue left on the plate and palate after eating it.  When mixed with the rice and the ginger pork stir fry, the oily residue was unnoticeable but in wanting to eat it separate, it was most definitely present.  Using the dark green mixture was a bonus as the bitter greens paired well with the sweetness of the stir fry and the bitterness of the garlic.  What a great way to use slightly limp greens of any flavor.