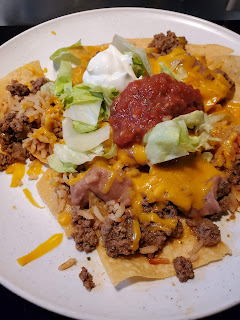 Back home my favorite place to get the best messiest nachos around was a little place called Tomatillos.  The plate was loving referred to as Daniels Nachos or Pablos Nachos.  Can't remember as it has been more than 25 years since I have eaten them.  The concept was simple.  Freshly fried thin tortilla chips topped with refried beans, spanish rice, taco meat, and two kinds of cheese.  Then it was topped with all the previous mentioned items again.  Directly on top of the first.  Then again for a third layer.  To the three layers of beans, rice, meat, and cheese was a heaping bed of finely shredded lettuce, a large dollop each of sour cream, guacamole, and pico de gallo.  It came to the table as a mountainous view of udder perfection.  Oh my word, did I love them.
Modifications Made:
Not having the appetite of a teenager, only one layer was made.  The taco meat and rice were homemade, leftover from burritos for breakfast this morning, the beans were modified from the can, and the cheese was just colby.  Lettuce chunks and homemade salsa were used in place of shredded lettuce and pico de gallo.
Scaled for Likability: Good
Never have I ever made them as I know whatever I made will not even come close to replicating Tomatillos perfection.  And I was right.  These were good nachos.  Good as in I would eat them again.  But Nachos de Tomatillos they were not.