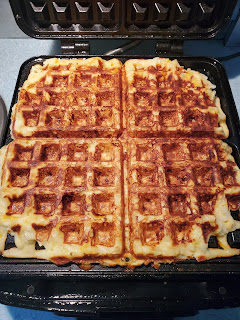 Undeterred from last night's zucchini-less waffles tonight Egg and Cheese Hash Brown Waffles were attempted for dinner again served with eggs, sausage patties, and orange juice. This is even more of an all american breakfast as it contains hash browns.  Only in a different format.

Modifications Made:
Chives and pepper were omitted.  While the recipe did not instruct to squeeze excess water out of the hash browns, this step was included as many other variations of hash brown waffles stated to do so.  Sour cream for topping was replaced with traditional pancake syrup for myself, ketchup for the teen counterpart, and extra salt, pepper, and butter for the second counterpart.

Scaled for Likability: Great
These were easy to make, crispy on the outside, light and fluffy on the inside, and tasted great, even without syrup and just extra butter.  They reminded me of German potato pancakes but without the applesauce. If applesauce had been available, I would have ditched the syrup immediately and gone for cinnamon infused cold applesauce.  Oh man, that would have been wonderful.