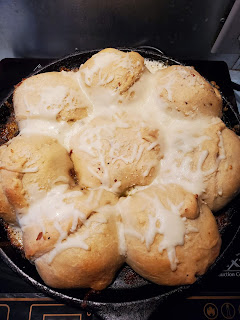 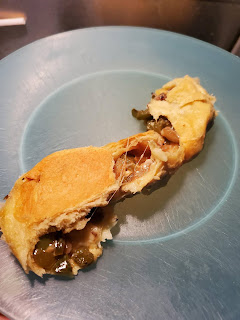 Several weeks ago a friend gifted steaks.  We ate them with as buttered steaks one night, steak quesadillas another day, and steak and egg tacos on another.  One can only eat some much steak so the remaining three deck size chunks were frozen in individual bags for later usage such as Philly Cheese Steak Stuffed Bread.

Modifications Made:
Leftover steak already seasoned with Montreal Steak Seasoning was substituted for deli roast beef and steak seasoning.  Meat was originally cooked medium rare so when reheated it would not turn to shoe leather and left whole.  Instead of bites, the meat was cut into thin strips.

Scaled for Likability: Good
Table counterparts enjoyed this meal much more than I did.  Having all the same ingredients as a traditional Philly cheesesteak sandwich, wrapped in crescent rolls did little to enhance the sandwich.  It is the crunchy outside of a hoagie, soft in the middle with warm, cheesy meat goodness that makes a cheesesteak sandwich.  Soft buttery crescent rolls, not so much.  Soft veggies, soft meat, soft cheese.  Too much goo, not enough texture.  To take the recipe as written and to sub a different hard crunchy bread, even if served on hard bread slices in an open face sandwich would have been better than bombs.  Luckily, being such a small batch of only 8 rolls, there was only one leftover bomb.