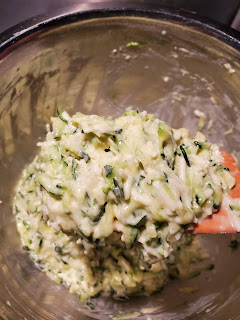 This same friend who gifted steaks also recently gifted her waffle maker of which we have been using with great frequency.  Waffles for desert are so good.  They are easier to make and have less sugar than cookies.  As added bonus, waffles are designed to be served hot where as with cookies there is always that 10-20 minute wait period.  Waiting is so hard. Tonight, however, waffles were not for desert but for dinner itself.  Zucchini Waffles with a side of eggs and a two sausage links. It was the all american breakfast. Healtified, sort of.

Modifications Made:
Pepper and cheese were omitted.

Scaled for Likability: Good
I have been cooking since I was tall enough to reach the stove when standing on a phone book on a chair.  In all that time, recipes have yet to come to some standard of being written.  Are 2 cups of shredded zucchini before being decompressed of water or after?  If weighed instead of measured, the same applies.  Before or after?  Sifted or not sifted flour. Milk: whole, fat-free, soy, almond.  Specifics.  Sometimes they matter.  Sometimes.

Waffle recipes are always made from a box and with instructions to follow.  Today the recipe was not from a box and the resulting consistency was very different from any waffle/pancake mix made before.  Having never made any waffle other than plain waffles from a box (oh so yummy), I carried onward with less than stellar results.

Final waffles were good in the fact they were crispy on the outside, not gooey on the inside, and held up well to butter and syrup.  What they lacked was zucchini.  My mother has a T&T zucchini nut bread recipe that is perfect fresh from the oven, room temp, cold, or served toasted with butter.  I was hoping the waffles were going to be more along the lines of the toasted bread.  Instead they were more regular waffles with some greenery.  Good all the same, just not what I was looking for.