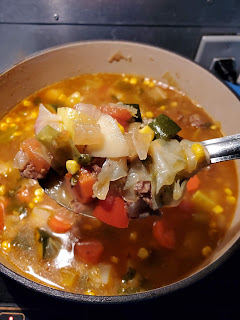 It is so hard not to cook warm winter meals in January.  Deciding it is not summer heat being experienced, soups like this Caldo de Res are allowable.  Sure, one might be a little warmer than normal as it is soup but not so much as to be hot and sweaty from eating.  Right?
Modifications Made:
Finding good beef soup bones is getting harder and harder every year.  If found, they cost the same as high quality round steak, or more!  Back in the days of college, veggie soup was a staple using beef bones as the base because they literally were four or five to a pack for less than a dollar.  An entire pot of soup, a weeks worth of meals, for the cost of less than $5.  Ahh, the memories...
Anyhoo, not having access to beef soup bones, Knorr three beef cubes and two pollo do tomate cubes were substituted to create about 40 oz of stock.  The stock was then simmered with a one tablespoon of comino, one pound of beef steak cut into cubes, and a bag of veggies contained in cheese cloth for easy removal.  Inside the cloth was one celery base, one small white cut into quarters, three garlic garlic gloves, and one jalapeno pepper left whole.  The stock, meat, and veggie bag were simmered until the meat was tender.  Stock veggies were removed.  Diced veggies of choice in roughly the same size were two celery sticks, two carrots, one red and yellow bell peppers each, one yellow squash, one zucchini, two roma tomatoes, one large russet potato, 1/4 head of cabbage, and one large handful of cilantro.  First the cabbage, cilantro, potatoes, and tomatoes were cooked till the cabbage was soft.  Then the remaining veggies were added and simmered until celery was soft.  Heat was removed and one can of corn of added and soup rested, covered for one hour.
Scaled for Likability: No, Thank You
Caldo de Res is standard fare all year round at South Texas Mexican food restaurants.  The veggie pieces are always too large to eat in one bite, the ear of corn makes a mess as it is always dropped back into the bowl of soup while attempting to eat, and the bowl is big enough to swim in if one desired.
What I made was not caldo de res but beef and veggie soup with a slight Mexican flare.  This recipe was made yesterday and lacked something.  Thinking the soup needed more time to meld its flavors, it was leftover night in the fridge and then served today.  Sadly it was still disappointing.  Not be wasteful, this jumbo size pot of soup will be eaten but it will be a task, I can assure you.  Ugh.