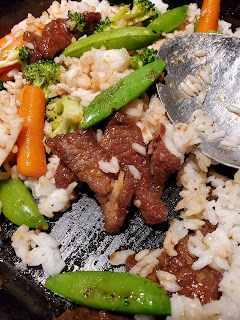 After succeeding with potstickers last week, another Asian dish was attempted.  Something other than a stir fry, a deep fried meat, or a soup.  In reading various blogs, the recipes all seemed similar in style just slight differences in seasonings.  Picking a recipe  not requiring additional ingredient purchases, Easy Crispy Mongolian Beef was attempted.

Modifications Made:
None.  Asian foods are one of those few recipes I have built up enough confidence to modify on the fly.

Scaled for Likability:  Fail
The problem with American versions of anything Asian is the sheer amount of sugar in the recipes.  To offset the simple ingredients and intense heat, Americans tend to add extra sugar.  A more appropriate title to this dinner should have been candied beef.  With a title like that, I would have known going in the meat was going to be sweet.  So sweet even when mixed with the plain pan seared veggies and rice the meat could not be eaten.  Each and every piece of meat was taken, washed under the sink to remove the sugary coating, tossed back into the skillet and quickly reheated.  Even then, the sugar was off putting.  What a waste.