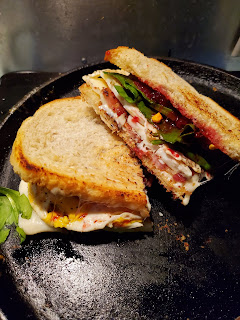 Last night's Turkey and Cranberry Panini was so fabulous I woke up this morning wanting it again.  But as I mentioned yesterday, there was no more BBQ turkey to be had.  Instead Bacon Egg Cheese and Cranberry Sandwiches were made thanks to a quick Google search for just such a recipe.  There really is no new recipes to be found on the internet.  Just old recipes swapped around.
Modifications Made:
Holy Moly, a lot.  Potato Bread instead of Rye, one slice of Swiss instead of four slices of white cheddar (although white cheddar would have been a great combo), one egg instead of two. When assembling, it was toast, bacon, cheese, egg, baby spinach, cranberry sauce.  Flip until both sides equally toasty and cheese is melty.
Scaled for Likability: Great
Breakfast sandwiches are a staple since childhood.  Served either for breakfast or for dinner.  As a child they were white bread, mayo, pepper bacon, egg slightly runny, and cheese.  As an adult, the bread can be any flavor any texture, the mayo is omitted, the egg hard, and the cheese is always mild cheddar.  They are a T&T recipe.  While breakfast sandwiches are eaten monthly never once I have had one so fancy as this beauty.  So many textures and flavors all wrapped up together creating the perfect breakfast. Or dinner.