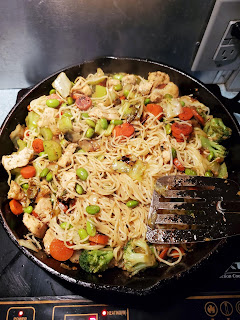 Stir fry.  Judging from the number of posts on this blog, stir fry is a popular dish at this table.  The youngest table counterpart is having a teen crisis, as mentioned numerous times, and still only wants carbs, cheese, sugar.  But as a all children before and children yet to come, the rule stands: dinner is what is being served, breakfast is in the morning.  Depending upon the level of complaint at dinner, breakfast might very well be dinner served again.  Its a standard growing up regime.  Not wanting to serve just Sesame Garlic Ramen Noodles for dinner, I modified it just a bit.

Modifications:
First, ramen was dumped as there is a time and place for ramen noodles, but tonight was not it.  Instead, angel hair spaghetti was used.  While the noodles cooked, one diced chicken breast was browned and then a bag of frozen Asian style veggies were sauteed.  Finally the sauce was doubled to accommodate all the extras, and because I like my noodles saucy.  When the noodles were done and drained, half the sauce was added to the noodle pot, the other half to the veggie/meat mixture.  The two were combined and quickly and let cook for 1 minute or so to evaporate some moisture.

Scaled for Likability: Good
It was good, in fact it probably would have been great if eaten as written in the instructions.  The veggies should have been served on the side and should have been more of the carrot/brocc/cauliflower mix not the bite size medley or even just a snap pea/water chestnut mix.  Addition of chicken in the noodles was a nice touch and would serve again with the chicken added to the noodles.  What kept this from being great was the Asian mix, the chicken, and the sauce was a meld of too many flavors.  Unlike a flavor explosion this was more of flavor fight with your taste buds being the loser.  With all that being said, there were still no leftovers so it was not a bust, it just was not a meal I would add to the T&T list.