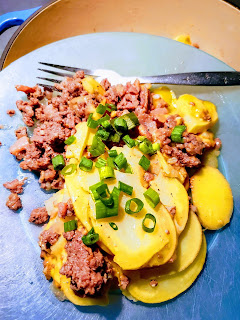 Meat and potatoes, the staple of every childhood meal.  The combinations were limitless and when tossed with a "veggie" it was a complete meal.  One such staple was scalloped potatoes and a pork chop, chicken breast, hamburger steak.  Tonight's meals Country Hamburger Skillet was a modern version of scalloped potatoes with burger steak combined in one skillet.  With the addition of cheese and chives, it was sure to be classic.

Modifications Made:
Bacon.  The best scalloped potatoes were the ones served with bacon bits and hamburger steak was always fried in bacon fat.  Since I was trying to modernize the classic meal memory, six slices of pepper bacon were fired along side the onion.

Garlic.  Calling for garlic salt on the potato layers and not having any, extra minced garlic was added to the meat itself during the browning stage.

Layers:  Layer one: bacon, onions, meat, garlic, salt and pepper to taste.  Meat was fully cooked before layer two was added.  Layer two: thinly sliced potatoes sprinkled with salt and pepper.  In the recipe, it states to cook the layers for 15 minutes, turn the top to the bottom, the bottom to top and continue to cook for another 15 minutes.  This step was skipped and the layers were cooked until potatoes were fork tender.  Once tender, the heat was turned off and layer three was added.  Layer three: colby jack cheese and chives.  Pot was covered and allowed to rest for 10 minutes.

Scaled for Likability:  Grood
Great if you were the table counterparts, good if you me.  The dish was everything a one pot classic meat and tater meal.  The teen table counterpart even had two servings.  For me, there was a missing element in the meat.  A gravy or sauce or something.  This was just ground hamburger meat with buttery moist potato slices on top.  All good but missing something.

Edit Feb 3, 2020:
Leftovers were even better than the first night.  During the reheating process, the potatoes and the meat were mixed causing the potato to break down into small pieces.  These small pieces created a base to the beef effectively creating the missing element.  Delish.