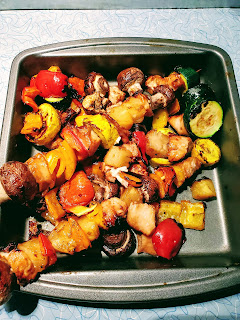 Being winter is still not here but the weather is not dreadfully hot, I decided it was perfect weather for BBQ.  Grilled Hawaiian Teriyaki Chicken Skewers were just the ticket.  Besides something bright was just the ticket to follow up two days of colorful cranberry sandwiches.
Modifications Made: Zucchini, yellow squash, and mushrooms instead of green bell pepper and purple onions.  Canned pineapple in its own juices (28oz) instead of pineapple juice and fresh pineapple as it is January making fresh pineapple difficult.  Everything was marinaded together, not just the meat.
Scaled for Likability: Good
Many months ago, I made a similar recipe using store bought sweet and sour sauce.  The sauce was too thick and became sticky on the K-bobs and the veggies were over done.  Three things were done differently from the last attempt.  Cutting chicken and veggies to the same size ensured a more even cook time, marinading all ingredients ensured veggies (especially mushrooms) did not dry out, and the sauce.  This homemade Teriyaki sauce was perfect balance in sweetness and heat to meld the flavors of the peppers and the pineapple.  Like all k-bobs, veggies and meat are all interchangeable as it turns out, the marinade is ticket to success.