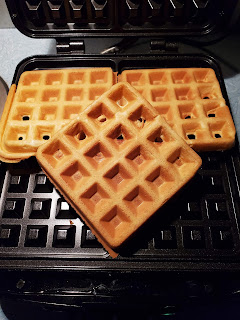 A few days ago, a friend gifted me her waffle iron I have borrowed on several occasions.  Stating it was only collecting dust and that I have used it more in the past few years than she has used in the last decade.  Fine with me, I have always wanted a waffle maker.  Not wanting to have a gift go wasted, it was immediately put to use with Belgian Waffles.
Modifications Made:
While is not the recipe I followed as I followed the recipe off the house brand of all purpose baking mix found at our local chain grocery store, it was similar to this. Very similar.
Scaled for Likability: Good
Belgian waffles these are not.  Ordinary waffles they are kicked up with additional ingredients.  Crispy on the outside, light and fluffy on the inside are the key attributes of a Belgian waffles. These were crispy on the outside when immediately removed from the iron but once plated and served they were typical soggy, limp waffles.  Lets not even discuss what they were after butter and maple syrup.  Not exactly what I had in mind, the waffles were devoured with a side of eggs and if this exact was being served I would happily eat them again. And not just one but my usual two or three squares.  However, the next time Belgian waffles are attempted with my new iron, I am gonna try this recipe.