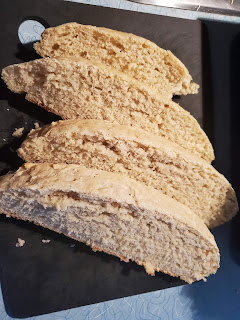 In creating Cabbage Beef Skillet I knew a bread would be needed to accompany the dish.  The bread needed to be more than a just store bought white bread.  Needed to be something more robust than brown and serve rolls.  Needed to be something hearty, substantial, and flavorful. Something like Easy No Knead Skillet Bread.  Cooked in a cast iron skillet, the bread would be toasty on the top and crunchy on the bottom.  A bread slice robust enough to push dredges around on the plate.

Modifications Made:
Not having fresh rosemary nor any fresh herbs to accompany the cabbage skillet, half of the bread was topped with a sprinkle of garlic salt, the other half just salt.

Scaled for Likability: Good
Easy to make, easy to cook, and so versatile in flavorings.  What more could one ask for in a bread? Oh, I don't know.  How about light fluffy insides, chewy and moisture, with a crunchy outside.  Succeeding with two out of three I don't consider the bread a loss but not having a light, bubble filled inside makes for a dense, heavy bread.  Tasty, yes.  Light to eat and perfect in fluffy bread image, no.  Not having fluffy, bubble filled, airy bread can be the result of many factors and a bad recipe is not one of them.  This bread was everything I wanted in a bread, just not fluffy.  In fact it was so good, the recipe will be saved and tried again.