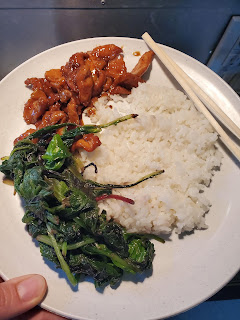 Waste not, want not.  With a 1/2 pound of pork steaks still in the fridge from Chinese Pancakes two nights ago, I decided to try my luck at another non-traditional American stir-fry. Yes, I know the Mongolian Pork Stir Fry was a complete disaster but one failed attempt should not negate another.  Like the Mongolian Pork, in Chinese Pork & Ginger Stir Fry the meat is not deep fried before serving.  Instead it is marinated and then covered in a heavily seasoned sauce and served over rice.  Sounded good to me.

Scaled for Likability: No, Thank You
Let me say it was way, way better than the Mongolian pork but it was not anything to write home about.  The sauce was too sweet even with the heat from the ginger.  Tried adding a chili sauce to the top but the sweetness was still too much.  Not too much as in it had to be washed off, just too much.  Then there was the store bought, Chinese Five Spice mixture.  Here in lies the whole issue with the stir fry.  Nutmeg.  An overwhelming large amount of nutmeg was contained in the seasoning and it over powered all other flavors.  It was so rich in smell, let alone taste, the teen counterpart asked when walking by the kitchen before dinner if pumpkin pie was for dessert.  All the sweetness and smell of pie but no pie.  Bummer on both ends, no pie and another failed dinner.  Bummer, bummer.