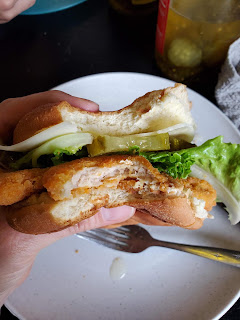 One of my favorite burgers as a teen was the $0.99 chicken sandwich at Jack in the Box. It was basically a fried chicken patty on a bun with a thin slice of lettuce. If it came with mayo I don't remember it or I must have always told them to hold the mayo because there is nothing, NOTHING, more disgusting than hot mayo. For less than $3, I could get two chicken burgers and a large cheap fountain drink from the ice house next door. It was perfect for a poor teen/young adult. It would be perfect for the working adult right now except it would cost closer to $6. Funny how that works, the price for a tasty lunch had doubled but my salary surely hasn't doubled in the 25 years since buying my first chicken sandwich.

Wanting to recreate my childhood memory and only have chicken nuggets on hand, I attempted to make an adult version of a chicken a sandwich.

Modifications Made:
Unlike the original version, a slice of Havarti cheese and three hamburger pickles were added. Instead of mayo, honey mustard dressing. Instead of wimpy iceberg lettuce, substantial butter lettuce.

Scaled for Likability: Good
Tasty as this burger was, an adult version of Jack in the Box it was not. The final product was more like a knock off version of a Whatachicken Sandwich, my favorite chicken sandwich from Whataburger. My favorite chicken sandwich that Whataburger no longer sells. Of course, being Whataburger, just because it is no longer a standard menu item doesn't mean it can't be had, you just have to create it from their vast selection of menu add-ons.

Using nuggets instead of patties made the burgers difficult to eat but the extra crispy from the nuggets was a nice touch to the softness of the bun. Butter lettuce was a nice touch but Romaine would have been better for another layer of crunch. Next time, I would also toast the buns before serving and have extra sauce on the side for dipping in instead of smearing on the bun. Hot sandwich, cold sauce. It's gonna be great!