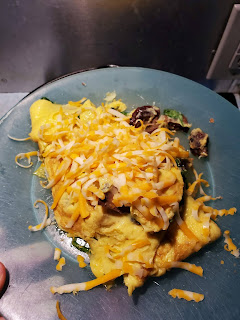 The gift that keeps on giving. Wanting to use up the remaining steak from several months ago, I created a Steak and Egg Omelet with Mushrooms and Spinach. Steak and eggs are popular, mushrooms and spinach are popular, so why not combine all three?

Melt butter and add eggs. Once slightly cooked add mushroom mixture to one half of skillet. Fold eggs over mixture. Flip omelet if needed. Cook till egg in middle is done. Cover with cheese.

Scaled for Likability: Good
Not a fan of steak and eggs but having enjoyed the steak and egg tacos a couple of months ago, I decided to give the omelet a whirl. Success was due to the thinly sliced steak instead of chunks. Chewing on steak is one thing, chewing an omelet is another. Placing the cheese inside the omelet is more customary than on the outside but i find cheese on the inside causes the egg to not fully cook. Runny eggs are not very yummy.

Not having any to add but will add for next time would be thinly sliced green onions. They would be added when cooking the mushrooms to ensure they are fully cooked and not crunchy ensuring their full flavors are revealed. Also for next time, a serving of thickly sliced multigrain buttered toast on the side.