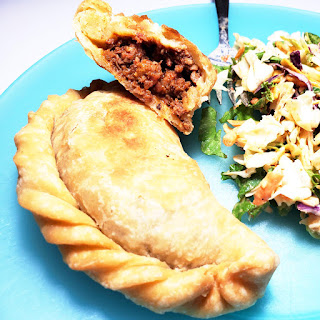 Last week a brisket was made on the BBQ pit.  Brisket tacos were served on Bacon Tortillas with the tortillas being the highlight of the meal as the brisket was tough as nails. Not wanting to waste the meat I attempted to Beef Empanadas, BBQ style.

Modifications Made:
Brisket meat replaced seasoned ground meat.  To a food processor, brisket meat was mixed until almost meat was finely diced.  Shredded meat and BBQ sauce were cooked in a saucepan on low while empanada dough was made.

Scaled for Likability: Good
Empanadas are for pumpkin filling only.  Not lemon, not pineapple, and definitely not meat.  Empanadas should be sweet not savory.  Yet these were so good.  Oh, they could have even been great if it weren't for the tough as nails brisket.  One bite was fine, two bites of brisket and the meat turns to chew in the mouth and there are just not enough teeth to tenderize it before swallowing.  If and when a tender brisket is made I would like to make the BBQ empanadas again. In fact, any time I have leftover meat (taco, shredded pork, ground chicken) I would like to try empanadas again.