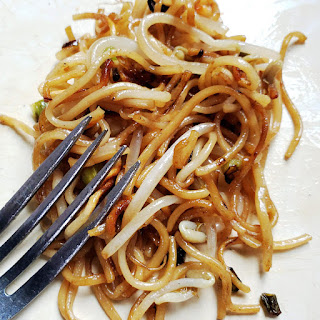 This table and its older two counterparts really love Asian foods.  I love them because they are usually super easy to make, Moo Shu Porken AKA Chinese Pancakes aside, and are usually loaded in vegetables.  Soups, stir fry, potstickers, noodles, rice.  They are all good.  Potstickers are cooked almost monthly, stir fry weekly, and lo mein no longer requires a recipe.  When Cantonese Fried Noodles appeared onto the food feed last week it was immediately added to the menu.  That is, of course, if bean sprouts could be found.  Never has this table had a dish with fried noodles and I super excited to try something different.
Modifications Made:
Dark soy sauce cannot be found locally and was substituted with tamari instead.  Shoaxing rice wine was substituted with mirin and quarter teaspoon of sugar was omitted as mirin is already sweet.  White pepper was replaced with black pepper.  Green onions replaced scallions. While a wok is owned has been used enough times it has a beautiful patina to it, currently it resides in storage.  Therefore, a large cast iron skillet was used instead of a wok.
Scaled for Likability: Great
Well, it could have been great if I hadn't had to use excess oil to keep the noodles from sticking to the skillet.  If one could over look the oily reside of the noodles and just focus on the texture and flavor, then the dish was wonderful.  Simply noodles, green onions, and bean sprouts with soy sauce and sesame oil would have been just as wonderful as was this version with the extra heat was from the pepper and the sweet from the mirin.  The crunch of the noodles, the crunch of the bean sprout, the sweet of the mirin to the salt of soy.  Delish.