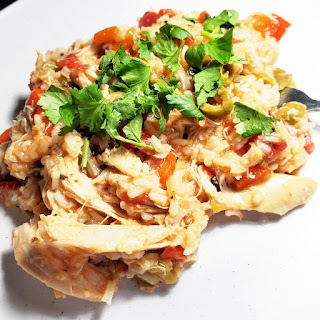 Ever in my quest to venture outside the cooking box, tonight the table counterparts were treated with Asopao De Pollo, a traditional Puerto Rican chicken stew. Very similar to a T&T staple, Chicken and Rice, this recipe was seasoned with a Mexican flare, and wait for it, green olives.  Yes, green olives.  Peppers, tomatoes, onions, chicken, green olives.  Let's go,
Modifications Made:
When discovering this recipe, I originally was attempting to follow this Asopao de Pollo recipe.  There was just not enough pictures to follow along and my Spanish only extends to the basic words not full complete, detailed cooking instructions.  The recipe did not seem complicated but I did not want to miss a crucial step so another version was sought out.
A whole chicken was boiled with onions, garlic, jalapeno, three pollo do tomate cubes, and enough water to leave at least five cups of chicken broth remain.
In a dutch oven, onions, bell peppers, garlic, and canned tomatoes were cooked in oil until soft.  Shredded chicken, rice, broth, bay leaf, red pepper flakes were added to vegetables.  Brought to a simmer, salt and pepper were adjusted and mixture cooked until rice tender.  Green olives were added and dish allowed to rest for ten minutes before serving.
Green peas were omitted.
Scaled for Likability: Good
This table and it what it likes or dislikes never ceases to amaze me.  99% of all meals are decided upon by myself.  There are the few times (less than a handful) when one or the other will make a suggestion or even bring a recipe to share.  They are mostly content with whatever is served.  Oh sure, comments will be made if the dish is a complete flop but tonight's recipe did not fit the standard routine and I was expecting some grumbles, some sideways glances, some hesitation.  When seconds were asked for, they each had their own specific requests.  One wanted more of the olives, the other more of the rice/veggie mix.  Yup, never cease to amaze.
The olives were what did me in and I love green olives.  Just not in my meat dishes as it turns out.  All of the olives were picked around and left on my plate.  When dinner was over, my plate looked like that of a child where the "greens" were pushed around and omitted from ever touching my fork much less my palate.
Was the dish good enough to eat again, yes. And in this game of eating outside the box, that makes this meal a winner.