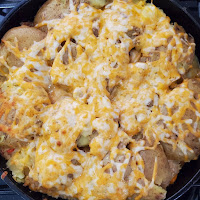 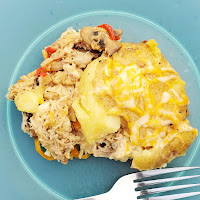 Even when trying new recipes almost every day, it is hard to cook outside the box.  I tend to see recipe feeds with the same cuisines over and over again.  The goal of this adventure was to cook new and exciting meals, meals not every having been served on the dinner plate before, meals having never ordered at a specialty restaurant before. Meals and recipes from around the globe!
As it turns out, recipes from around the globe is difficult as ingredients are regional.  Not gonna find a lamb rump in this neck of the woods, banana leaves at the local ethnic market, or anything other than ham, turkey, salami, or roast beef, Havarti, Swiss, or cheddar at the deli.  Ethnic meals are therefore limited in selections.  Tonight, in my never ending efforts to be global, was a Russian (possibly?) Squashed Chicken Surprise.
Modifications Made:
Ten gold potatoes replaced baby potatoes.  They were boiled as instructed, cut in half width wise, and smashed with the palm of my hand.  Bacon was doubled, sun-dried tomatoes were omitted, Hungarian paprika replaced smoked paprika.
Scaled for Likability: Great
This tables final result did not look anything like the original posting as mine was not swimming in moisture and tasty juices.  In rereading the instructions, I am not really sure as to where the clear liquid would have come from as no additional chicken broth or water is added.  In fact the only liquid at all is from one cup of heavy cream.  Lest not, the dish was moist and flavorful and had a great combination of textures.  The bacon, the chicken, the mushroom, the potatoes, all wrapped up in cheese.  The best part, unlike all previous attempts at cooking bacon inside of a dish, this bacon remained crunchy!
In cooking the dish again in the future, one cup of chicken broth will be added to the chicken and veggie mixture before placing in the skillet.  Chives will be added atop for a nice onion hint at thee end as well as a brightness of green splash against the red and yellow background.