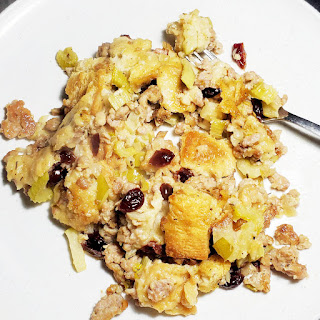 Stuffing.  I have a love hate relationship with stuffing.  Homemade stuffing rocks but it way to much effort to make, even at Turkey day.  Homemade stuffing placed inside a turkey is a no go but will be eaten if the texture is right and dry enough.  Meat stuffing is a never.  The table counterparts love the stuffing in a box.  Love it as they could just eat for dinner with a salad.  So when Sausage and Apple Dressing with Cranberries was found, I just had to make it.  It was chunky, filled with apples, celery, and cranberries, and had just enough meat to make it more than just bread.

Modifications Made:
Bread cubes were roasted in oven until dry and crunchy to help eliminate any potential to soggy bread.

In reading the instructions, I found the order of operations to be backwards.  For my stuffing, the sausage was browned, the set aside to drain of fat.  The onions and celery were cooked till soft.  Apples, dried cranberries, sausage crumbles, and all seasonings, and chicken broth were added to onions and celery.  Mixture was cooked until apples were just tender.  In remaining broth, bread crumbs were added and mixed well.  Mixture was then poured into warmed 12" cast iron skillet and cooked until stuffing mixture was dry(ish).

Scaled for Likability: No, Thank You
In my head I want stuffing.  Bread cubes, apples, cranberries, celery, spices, sometimes pecans, sometimes cornbread.  In actuality, stuffing is for the birds.  The bread cubes became soggy, never to dry out resulting in mush.  The apples reduced to applesauce causing extra liquid inside the cast iron skillet.  If bread was picked around, the pork/celery/dried cranberries were good but not filling.  A serving was had by all and the chickens are the rest.