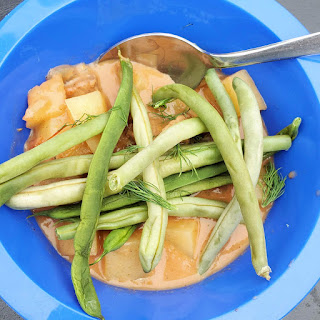 One of my very first non traditional American meals served was Hungarian Goulash.  It was immediate love.  Served it to both sets of meat eaters in-laws.  One review was as expected because it did not fit their 60+ year preconceived notions of goulash or stew.  Appreciation of culinary cuisine does not exist there.  The other immediately asked for the recipe and has since made it several times.  What was there not to love?  Meat, potatoes, carrots, all swimming in a savory gravy.
When Ukrainian Stewed Beef and Potatoes was discovered a few weeks back, my initial reaction was another version of Hungarian goulash.  Upon closer inspection, one sees the differences.  Vast difference.  Differences similar to American stew vs pot roast.  Both stew and pot roast contain beef, carrots, and potatoes yet no one would classify these two dishes as the same.  I found myself becoming excited for a hearty soul filling dish.
Modifications Made:
Hungarian paprika replaced smoked paprika.  Russet potatoes replaced white potatoes.
Scaled for Likability: Great
Nope, this is definitely not Hungarian goulash.  It is not better or worse but as good.  Thick flavorful sauce enclosing tender chunks of meat and potatoes.  Three ingredients that made this entirely different from the Hungarian goulash: tomato sauce, heavy cream, and dill.  Don't skimp out on the dill.  In fact, the dill was such a stark contrast to the flavors, I added extra to my bowl.
Oh, and if you want to American-ize this perfect Ukrainian dish, steamed fresh green beans mixed in at the last minute is wonderful.