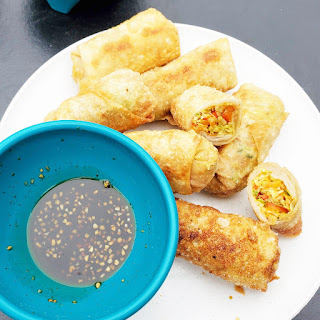 In my quest to conquer all my favorite Asian foods, this morning for breakfast Awesome Egg Rolls were attempted.  Yes, for breakfast!  Luckily by the time they were actually completed it was closer to an early lunch so it was fine.  Really.
Modifications Made:
Ingredients - Bean sprouts are one the hardest veggies to find at my local grocer.  The label is always there, directly between the wonton/egg roll wrappers and jars of kimchi.  Yellow bags filled with crisp mung beans sprouts that are never available when I wish to buy.  So instead, thinly sliced red pepper replaced the crisp bean sprouts.  Wanting veggie egg rolls, eggs and shrimp were omitted with no replacements.
Scaled for Likability: Great
Good grief, what a mess.  For my birthday, I purchased a food processor and this was my first meal using it.  I played with both shredding disks, shredded cabbage in multiple different directions to compare shred results, double shredded long strands of cabbage, sliced carrots, shredded carrots, and had more food than I knew what to do with!  It was so much fun but the mess it makes.
Even with the food processor cleaned up and the cabbage, carrot, celery, pepper mixture nicely sitting in a very large bowl, the process of making egg rolls is messy.  Key to successful wrapping of an egg roll turned out to be less is more.  Too much stuffings and the stuffings break the wrapper.  Too much stuffings and the wrapper won't seal.  Too much stuffings and the egg roll becomes soggy.  Once the perfect one heaping tablespoon of stuffing was finalized, the results were absolutely worth the mess.  The table and all of its counterparts ate way too many egg rolls to be healthy.  Good thing there is extra stuffing left over so tomorrow we can have more egg rolls.  Maybe egg rolls with steamed broccoli, carrots and snap peas on the side.  Delicious!