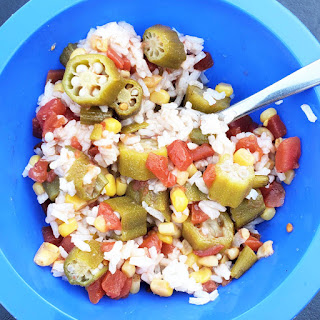 "...But they got this depression on...." Such a great line from a great movie.  One of my all time favorite broke college meals was Margaret Holmes Tomatoes, Okra, Corn served over plain white rice. A cup of rice + two cans of succotash = dinner for a week.  If I was feeling extra hungry, it was two cups of rice + three cans of succotash = dinner for a week.  Nothing has changed with my love of this meal except in the findings of the canned succotash.  After having a rough week with all the ups and downs of this here pandemic, I thought it would be fitting to have both T&T recipes as well as a cheap depression error meal that makes the heart happy.  Well, at least my heart!
Modifications Made:
Alas, not one can of Margaret Holmes can be located.  Not even the tomato and okra only version which is not as good but would have worked in a pinch.  Instead, the entire dish was made from scratch.
Ingredients:
One can petite diced tomatoes, undrained (ones flavored with peppers would have been very good but plain was the only option)
One can no sugar added  (harder than you think) corn, undrained
One bag (16oz) frozen okra
Tony Chachere seasoning
Rice
Instructions:
To pot, petite diced tomatoes were added along with one cup of water, water drained from canned corn, and one tablespoon of Tony Chachere seasoning.  Cooking the tomatoes in seasoned infused water gave them some flavoring while allowing them soften.  Once tomatoes reached desired softness, okra was added and cooked until tender.  Corn was added, mixed into tomatoes and okra and dish was allowed to rest for ten minutes.  Test for seasonings during rest time.  Serve over rice.
Scaled for Likability: Great
When this here pandemic has settled or grocery store suppliers are refilled, I am taking stock in cans of Margaret Holmes Tomato, Okra, Corn.  Cans as in maybe a case.  Not a hoarder by any means, I am just tired of wanting simple food basic staples and not being able to get them.  No ground beef today, fine with me.  No whole chickens available only legs, fine with me legs shred just as easily.  No off season fruits, reminds me of being a kid when strawberries were only available for a few short weeks.  No canned veggies, ugh.  No frozen veggies, double ugh.
Even though this was not the lovely prized canned succotash, my homemade version was very, very good.  If it wasn't for that special place in my heart, the canned version is not near as healthy as my homemade version.  No preservatives, no additional flavorings, just wholesome veggies over rice.  Ok, sure brown rice would have been healthier but white rice is cheap.  Just love this T&T meal, either variation.  Should really double the quantities when cooking because I love the leftovers for breakfast even more!!