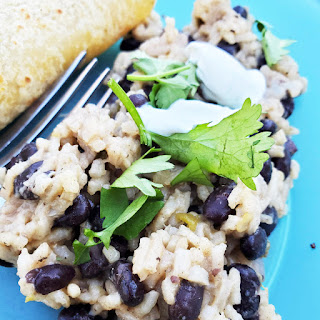 Yesterday, brisket tacos were served for breakfast.  Again.  They are so good and when brisket freezes and reheats just as good when served fresh, why not?  Not having enough brisket for just tacos again today and needing a new recipe, I decided to get fancy and serve Cilantro Lime Rice with Black Beans as a side.  Cilantro to accent the cilantro on the tacos, black beans for extra nutrient power, and rice as the filler.  Apparently this is a deal in big cities where a Chipoltle can be found. Now I have had a Chipolte burrito once about twenty years ago.  Seriously.  It was way, way before the teen counterpart was even the radar and I was just out of college.  So yeah, some twenty years ago, at least.  If I had their Cilantro Lime Rice in the burrito then I guess I can say that I have had it.  I don't remember it from then but I wanted to try it now, twenty years later.  Again.  Not wanting to drive to the closest Chipolte three hours away, I decided the home version would have to do.
Modifications Made:
Washing the starch off rice.  Not having read a recipe since I was teen that said to wash the starch off rice, I did not.
Scaled for Likability: No, Thank You
There is great debate about wash starch off rice depending on what side of the line you stand on.  The instructions to cilantro lime rice started similar to Spanish rice with browning rice.  In Spanish rice, one never washes the rice to remove the starch, the rice is browned very, very well before cooking.  Browning the rice allows the kernels of rice to fluff easily and to maintain individuality once cooked.  Not be a sticky mess.  A sticky mess like this cilantro lime rice.
It wasn't the recipes fault completely for the disastrous result but a combination of two elements.  One, the lack of very well rinsed and drained black beans.  Rinse and rinse and rinse.  While the rice is cooking, drain and drain and drain in a colander.  Two, don't add the beans to the rice until after the rice has cooked.  Adding the beans to the rice before hand causes the beans to break down, turning into mush exploded pods.  If added after the rice cooks, the beans will warm enough with the heat from the rice and maintain their perfect black form.  I have done this in other recipes so I know it to be true and wondered why the beans were cooked with the rice in this recipe when reading.  Should have gone with the gut instincts.
When a recipe is a failure, even if ate before being tossed to the chickens, there is always this lingering idea of trying a second time to see if better results can be procured.  This idea has been coming and going with this recipe and maybe one day in the future it will be tried again.  Maybe one day when leftover buttered rice is in the fridge needed a reason to be used.  Maybe.