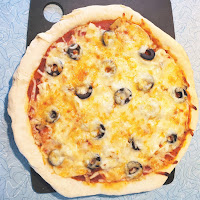 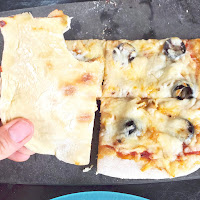 Ahh, the weekend.  What better way to spend the weekend than by cooking up a personalized pizza made with your very own homemade pizza dough.  If nothing else goods from this here pandemic, having the time to cook elaborate meals and attempt many new recipes will have been worth the stress and frustration.  Maybe.  Frustrations are quite high today.

With time on my hands and still having a craving for yummy pizza another homemade pizza dough was tempted.  The Best Pizza Dough Recipe was more along the line of an original pizza dough as it requires yeast and proof times.  It did not contain garlic sadly, but it did contain milk, oddly enough.  Since my favorite tortilla recipe, another T&T staple, contains milk oddly enough, I decided this recipe had to be tried straight away.

Modifications Made:
Salt was increased to one full tablespoon and dough was cooked following the traditional pizza crust cooking method.

Scaled for Likability: Great
Yes, it took time to prepare but most of the work was done by the paddle mixer on the stand mixer itself.  My actual time was ten minutes, maybe.  The hardest part, deciding what toppings to use and rolling the dough.  One was perfectly round, the other looked like one of the dozen or so block shaped states (Arizona, Dakotas, Oklahoma, Oregon, New Mexico, Utah, take your pick).  Shape didn't matter as the resulting dough was perfect.  Well almost perfect as it needed garlic butter crusts.  Resulting dough was pillow soft insides with a crunchy bottom layer.  There was pull when biting off the crust itself and a slight chew when eating.  It was so good.

Next time the dough is made, no garlic will not be added to the dough itself as the second half of the dough will be used for pizza rolls.  Cinnamon rolls made with pizza dough.  Preferably with better results than the Sweet Garlic Buns from a couple of nights ago.