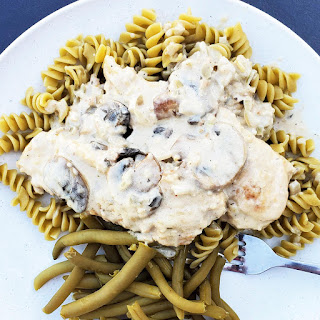 Who knew it could be so difficult to use up an entire carton of heavy whipping cream without resorting to Grammy's Fruit Salad.  Maybe it has something to do with the fact the table counterpart does not care for creamy or milky dinner dishes.  Cream kinda has to be snuck in and done creatively like in the Ukrainian Beef Stew.  There are so many creamy chicken rice/barley/risotto/lemon dishes/soups I would love to try.  Alfredo sauce is about the exception to the creamy dish.  Basing my searching on the idea of a modified Alfredo sauce, One Pan Creamy Garlic Chicken Breasts was served.
Modifications Made:
Hungarian paprika replaced standard paprika.  Added four ounces of sliced fresh mushrooms to shallots and garlic to soften.  Italian seasoning was omitted.  Two cups of water were added to stock and chicken was allowed to simmer in cream stock until thickness level desired.  Parmesan cheese was added directly before serving to retain some of its coarseness.
Scaled for Likability: Good
Alfredo sauce it was not but it was most certainly good.  The sauce was good enough stand alone and the next time it is made it will be served without meat products. Instead the sauce will be tossed with the pasta along with green beans, asparagus knobs, carrots, halved mushrooms, and or brussel sprouts.  If chicken was served again, chicken would be diced into cubes and served with broccoli and pasta shells as a casserole.