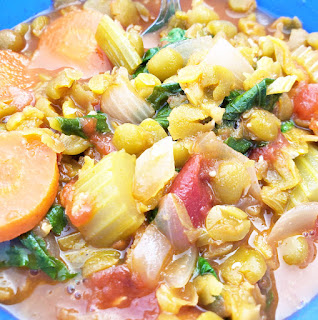 Split pea soup is the bane of every child's dinner at some point in their life.  Maybe even the bane of some teen's dinner at another point in their life.  Grandma loves it, maybe even mom loves it, no child ever has loved it.  EVER EVER.
Really what is there to love?  Split peas cooked to a thick green mush served with; if your lucky; chunks of tender ham, if your not so lucky no ham or worse grizzly gross tough ham bits off the ham bone.  Mush and gristle.  Yuk.  Split pea soup; closely resembling the back end of infants or chickens, take your pick served at dinner tables all across the nation.  Split pea soup that never once looked like Everyday Split Pea Soup because if it did children would complain about the veggies but they would eat it and maybe even ask for seconds.
Modifications Made: Petite diced tomatoes replaced diced tomatoes, chicken stock replaced vegetable stock, chard replaced spinach.  Chard was added the same time the rest of the ingredients were cooked to allow plenty of time to soften.
Scaled for Likability: Good
It is not as good as my T&T lentil, barley, split pea soup with veggies but it better than any creamy, smokey, hamey green mush split soup ever served.  In order to achieve this as a great recipe, several preparation methods must be taken. Onions cooked until super, super soft.  Smaller celery, diced carrots, crushed tomatoes, and a bay leaf will be cooked in onions before additional ingredients are added.  Double the broth and stop the cooking process at more of an under cooked pea. The first bowl of soup was great.  The second bowl was turning close to mush as the peas continued to cook in the broth.  The leftovers tomorrow will be iffy.
This soup makes enough to feed an army, especially when served with warm crunchy bread.  Am looking forward to trying again with modifications mentioned above.
Edit April 25, 2020:
Leftovers were tossed out as the peas completely turned to mush causing the soup to become thick upon reheating on the stove.