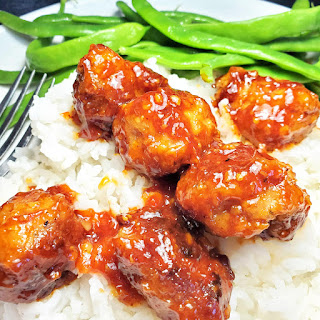 Fear.  Fear is not passed from genetic line.  Fear is passed along thru nuture.  The teen table counterpart as a young child had no fear of the dark, the woods, the unknown.  Camping outside at grandmas in a tent all alone at three years of age, not an issue.  Walking from the garage to the house in the dark city night at thirteen, not so much.  What changed?  Other peoples conceptions and fear (all irrational, of course).  It's not safe to camp outside at three by yourself, it's not safe to sail a boat at seven by yourself, it's not, it's not, it's not.  This it's not culture is not right.  From fears of the dark to fears of cooking.  It is all the same fear.
Fear has lead many of curious chefs to restrict their cooking ideas.  Forcing myself to try new recipes has opened up a whole range of meals I no longer fear cooking. Non-beef burgers, non-sweet Asian stir fry, meat substitutes, and meatballs.  Oh, how I used to fear meatballs.  Meatballs as a kid were always the same.  Dry balls of chewy under flavored meat drowning in an overly sweet sticky BBQ sauce.  Not today, today's meatballs are chicken, pork, beef, Indian, Thai, or Asian like these Honey Garlic Pork Meatballs.
Modifications Made:
Meatballs: For the pork itself, three gloves of garlic were added instead of one and the meat was handled as little as possible allowing meatballs to stay nice and airy inside instead of dense and dry.  Meatballs were fried in a skillet on all sides until evenly brown.
Sauce: Ketchup is for french fries and fried catfish.  Not burgers, not hot dogs, not shrimp, not sauces.  Even BBQ sauce!  Yes, BBQ sauce has a base in ketchup but the other ingredients out weight the ketchup and some BBQ sauces are not even based in ketchup at all.
Meatballs were removed from skillet and one tablespoon of butter was added to pork fat renderings.  To the butter mixture, 1/3 cup ketchup, three cloves of garlic, three tablespoons each of soy and honey, and one teaspoon of Sriracha for slight heat.
Meatballs were added to the sauce and allowed to simmer for 10-15 minutes adding water as needed to keep sauce from sticking to bottom of pan.
Scaled for Likability: Great
Fear, totally and completely irrational not matter the object of fear.  Meatballs are not hard to make, they are just a little time consuming.  It is not any different than making a hamburger and I have never meet someone who ran from the kitchen when asked to make a burger.  They are mini burgers, really.  The key to a good meatball is flavoring the meat itself.  Meat flavor and sauce flavor should compliment each other in the basic ingredients such as onions, garlic, peppers, salt.  If the meatball could not be eaten by itself then the meatball in the sauce is not going to be any better.
For the non traditional BBQ sauce meatball this was a great start into a new path.  The next meatball I want to try is something with more heat and less sweet.  Something maybe pineapple juice based with cayenne pepper or adobe chipolte pepper infused over a chicken or turkey instead of pork.  Something a little more extreme.