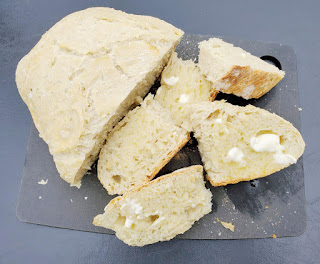 Like so many other people all across the globe, being stuck at home gives one plenty of time to try new things.  Guitar, yoga, sewing, bread making.  My mom could make the worlds best bread, then she bought a bread maker and so long homemade bread.  Bread maker bread is not the same as homemade bread.  My whole life I have never been able to master homemade bread.  With nothing but time on my hands for the last few weeks a dozen different recipes have been tried.  Sourdough, yeast, yeast-less, whole wheat, Artisan.  Today, attempt number too many to keep count was the World's Easiest Yeast Bread.
Modifications Made:
Yeast, any brand, variety, or cooking fashion cannot be had currently.  And while I do have three sachets in the pantry they are being saved for break glass emergencies.  Sourdough starter replaced the two teaspoons of rapid rise yeast using this conversion method requiring 50 grams less water.  Once the bread dough was mixed, the bread was allowed to rise on the counter for an hour and then stuck in the fridge overnight for the remaining flavor development.  Due to our high temperatures, rising bread on the counter is ridiculously tricky and the fridge method works best.  This morning, the bread came to room temp while the oven and dutch oven came to correct temp of 450 degrees.  Bread was poured out on a flour lined parchment paper, gingerly folded into shape, and parchment and bread were placed in dutch oven.  Times vary every day due to high humidity.  This bread was cooked for 30 minutes and was not allowed time to brown on the outside without the lid as the bottom would have burned.
Scaled for Likability: Great
Bread # too many to count is by far the best attempt yet.  There was some wonderful bubbles and the bread was light and fluffy.  Most all others have been dense and heavy, tasty but not right.  Using just sourdough as the starter, there was very little sourdough flavor.  A slice was had by all counterparts while standing over the stove, the rest needs to be saved for dinner tonight as dinner was the whole reason for this bread attempt.