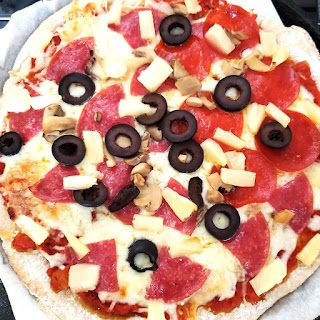 Almost two months into this stay at home pandemic order and I am finally coming into a new routine.  One I am starting to love more than at first.  Being at home has allowed for more experimental cooking.  Cooking that requires more than weeknight dinners allow in modern America.  Cooking our grandmothers or great grandmothers did when all they did was stay at home, raise kids, and cook time consuming pastas, stews, roasts, and breads.  Maybe not pizza breads, but I would like to think there were homemakers making pizzas like Cast Iron Whole Wheat & Herb Sourdough Pizza with homemade Thick and Rich Homemade Pizza Sauce.
Modifications Made:
Dough: Fresh herbs are hard to find, hard to keep in the fridge, and hard to incorporate before they spoil.  Therefore, dry herbs are always substituted unless fresh is absolutley required, such as in pesto.  For the pizza dough, garlic and onion powder and a little dry marjoram was used.  Not wanting too crispy of a dough, the dough was under cooked the first time by four minutes.  Yes, half the time was cut and while I was worried about soggy dough, the pasta sauce was reduced to offset the moisture.
Sauce: Oregano was replaced with marjoram, garlic was doubled, red pepper was omitted, and the sauce was allowed to cook until very, very thick.  Close to an hours time.  Wanted a very thick sauce to help reduce soggy crusts.
Scaled for Likability: Great
Perfect is the killer of great things.  But practice make for better greats.  Here this is the third homemade pizza in less than a month.  All three were different dough ingredients, with different preparation instructions, and different cooking methods.  All three yielded different crusts.  I honestly believe this was the best crust because it followed the more traditional preparation method, the slow rise and proof.
Being warm already outside, the dough would not allow for three hours rise time, however, the dough was more than doubled in volume before crusts were rolled.  Following the instructions as written produced two crusts, one for the 10" cast iron griddle and the other for the 8" aluminum baking pan.  Had the 12" cast iron skillet been warmed ahead of time with the griddle, the second crust would have been baked in it hopefully having resulted in a softer crust.  Crusts were not exactly crunchy nor where they chewy  What they were were slightly dry.  Next time, a garlic butter sauce will be wiped across the crusts before baking.  One can never have too  much garlic butter sauce when it comes to pizzas.  Also, this was the first time a plain cheese pizza was not cooked to compare to the previous versions.  With that said, this was by far the best dough yet and the next time it is made, the whole wheat flour will be replaced with straight white all purpose flour.  Now to conquer a more robust sour dough crust!